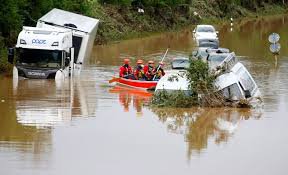 Against the background of the severe damage due to weather events in German regions Rhineland-Palatinate and North Rhine-Westphalia, the German Ministry of Transport (BMVI) decided to introduce exemptions from the restrictions concerning rest and driving times, exclusively for transports that are in the context of relief / elimination of the consequences of severe weather damage, up to and including 01.08.2021 (see copy of decree attached).

For the a.m. transports, exemptions are as follows:

The a.m. exemptions may only be used on the condition that their use does not affect traffic safety. In particular, before starting a journey, it must be checked whether the driver is capable of carrying out the intended transport.

Hungary: driving restrictions lifted because of the heatwave on 23 July

Austria-Germany: closure of alternative routes to Bavarian highways for trucks over 7.5 t during the block clearance measures on the Austrian A 12

Slovakia: suspension of the driving restrictions due to the heatwave on 23 July and 24 July

A special prohibition applies during the summer period for trucks over 3.5 tn on the A1 Motorway (Athens-Thessaloniki-Evzoni) in the direction of Thessaloniki

Additional driving restrictions for trucks in Greece for 1st May

Driving restrictions for trucks during the 2022 Easter holidays

Temporary derogations of the provisions on driving times, breaks and rest periods in Romania

Bulgaria: Pass of the Republic closed in October